CANCELLED Due to winter storm. Stay warm and safe!

Webcasts courtesy of the Greek Orthodox Archdiocese are available at:

Let us believers praise and worship the Word;

coeternal with the Father and the Spirit,

born of the Virgin for our salvation.

For, He took pleasure in ascending the Cross in the flesh

to suffer death; and to raise the dead

by His glorious Resurrection.

Click here to listen to the Resurrection  troparion, here for sheet music

How magnified are Thy works, O Lord; in wisdom hast Thou made them all.

Bless the Lord, O my soul.

Brethren, when Christ, Who is our life, appears, then you also will appear with him in glory.  Put to death therefore what is earthly in you: fornication, impurity, passion, evil desire, and covetousness, which is idolatry.  On account of these, the wrath of God is coming upon the sons of disobedience.  In these you once walked, when you lived in them.  But now put them all away: anger, wrath, malice, slander, and foul talk from your mouth.  Do not lie to one another, seeing that you have put off the old nature with its practices and have put on the new nature, which is being renewed in knowledge after the image of its Creator.  Here there cannot be Greek and Jew, circumcised and uncircumcised, barbarian, Scythian, slave, free man, but Christ is all, and in all.

At that time, as Jesus entered a village, He was met by ten lepers, who stood at a distance and lifted up their voices and said, “Jesus, Master, have mercy on us.”  When He saw them He said to them, “Go and show yourselves to the priests.”  And as they went they were cleansed.  Then one of them, when he saw that he was healed, turned back, praising God with a loud voice; and he fell on his face at Jesus’ feet, giving Him thanks.  Now he was a Samaritan.  Then Jesus said, “Were not ten cleansed?  Where are the nine?  Was no one found to return and give praise to God except this foreigner?”  And He said to him, “Rise and go your way; your faith has made you well.”

for Saint Makarios of Egypt

for the Presentation of Christ in the Temple

Thou, O Christ God, Who by Thy Birth, didst sanctify the Virgin’s womb, and, as is meet, didst bless Simeon’s arms, and didst also come to save us; preserve Thy fold in wars, and confirm them whom Thou didst love, for Thou alone art the Lover of mankind.

† Our Holy Father Macarius (Makarios) the Great (circa 390) 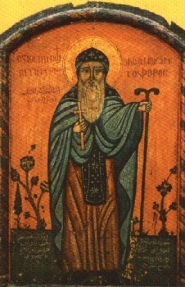 He was born around 300 in Egypt and in his youth was a camel driver. While still living in his village, he withdrew to a small cell to devote himself exclusively to ascesis and prayer. When the people there wanted to make him a priest, he fled to another village. There a young woman who was discovered to be pregnant falsely accused Macarius of being the father. Macarius was seized, reviled and beaten, but made no effort to defend himself; instead he took on more work in order to provide for the mother and her child. When his innocence was finally discovered, the townspeople came to ask his forgiveness; but he fled to the desert of Sketis (now called Wadi Natrun). He was then thirty years old, and for the rest of his life he dwelt in the desert.
His humility and detachment from earthly things were so great that once, when he discovered a thief stealing his few possessions, he helped the man load them onto his camel, even pointing out to him the few things he had missed. Once a demon spoke to him thus: “Everything you do, I do too: you fast, but I never eat; you keep vigil, but I never sleep; you only exceed me in one way: your humility. Because of this I am helpless against you.” The Saint said that the demons could be put in two categories: those who arouse passions such as anger, lust and greed; and others, much more dreadful, who deceive us by spiritual illusion, blasphemy and heresy.
Saint Macarius soon became known throughout Egypt, and many visitors came to his isolated home. He welcomed all with joy, judging no one and providing hospitality for all. His compassion extended to all, and he prayed even for the damned. Once he found the skull of a pagan priest, which addressed him, saying, “Each time you have pity on us who are in torment, immersed in fire and darkness, we receive a measure of comfort and are allowed to see the faces of our fellow sufferers.”
Saint Macarius became a disciple of St Anthony the Great, and in his turn became the spiritual Father of many who came to live near him in the desert. He is considered the founder of the ancient and venerable monastic community at Sketis. At the age of forty he was ordained a priest at the urging of St Anthony, so that he and his brethren would not have to walk the forty miles of desert to Nitria to go to church.
Knowing that he was soon to die, he visited his disciples one last time, saying to them with tears in his eyes, “Let us weep, brethren, so that our eyes flow ceaselessly with tears, before we go to where our tears will scald our bodies.” Soon thereafter he reposed. His relics now rest in the Coptic monastery that bears his name. The collection of fifty Spiritual Homilies attributed to St Macarius is a treasury of Orthodox spirituality.

Our Holy Father Mark Eugenikos, Metropolitan of Ephesus and Confessor of the Orthodox Faith (1443)

This holy defender of the One, Holy, Catholic and Apostolic Church labored in the final days of the Byzantine Empire, when, pressed on all sides by the Turks, the Emperor in desperation sought union with (or rather submission to) the Papacy in hopes of obtaining aid from the West. It was St Mark who stood almost alone to prevent such a disaster to the Faith.

He was born in Constantinople in 1392 to devout parents. He received a thorough education and seemed destined for a secular career, but at the age of twenty- six he abandoned all worldly claims and became a monk in a small monastery in Nicomedia. Soon the Turkish threat forced him to return to Constantinople, where, continuing in the monastic life, he wrote a number of treatises on prayer and the dogmas of the Church. In time he was ordained priest, then, at the insistence of the Emperor John VIII Paleologos was made Metropolitan of Ephesus. The Emperor also prevailed on him to join the delegation which traveled to the Council of Florence to consider the reunion of the Orthodox Church and the churches under the Papacy. (Saint Mark went as exarch of the Patriarchs of Jerusalem, Antioch and Alexandria, who were unable to attend.)
The Greek delegation included the Emperor and the Patriarch of Constantinople. All, including Metropolitan Mark, began with great hopes that a true union in faith might result from the Council, but as the sessions proceeded, it soon became clear that Pope Eugenius and his theologians were interested only in securing submission of the Eastern Church to the Papacy and its theology. The Metropolitan spoke forcefully against various Latin dogmas such as the filioque and Purgatory, but the Greek delegation, desperate for western aid, bowed to expediency and agreed to sign a document of Union which would have denied the Orthodox Faith itself. Saint Mark was the only member of the delegation who refused to sign. When the Pope heard of this, he said “The bishop of Ephesus has not signed, so we have achieved nothing!”
When the delegation returned to Constantinople, the signers of the false Union were received with universal condemnation by the people, while Metropolitan Mark was hailed as a hero. The churches headed by Unionists were soon almost empty, while the people flocked to the churches headed by those loyal to Orthodoxy. Saint Mark left the City to avoid concelebrating with the Unionist Patriarch. He was exiled by the Emperor to Lemnos, but was freed in 1442. He continued to oppose the Union until his repose in 1444. In 1452 the Union was officially proclaimed in Constantinople, but the hoped-for Western aid was not forthcoming, and the City fell to the Turks in 1453.
(from abbamoses.com)

Scripture and service texts from www.antiochian.org