The Last Week of Great Lent 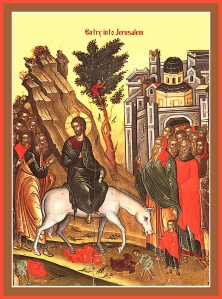 when we were buried with thee in Baptism,

we became deserving of thy Resurrection to immortal life.

Hosanna in the highest, blessed is he that cometh in the Name of the Lord.

when thou didst raise Lazarus from the dead,

thou didst confirm the universal resurrection.

Wherefore, we, like babes, carry the insignia of triumph and victory, and cry to thee,

O Vanquisher of death, Hosanna in the highest.

Blessed is he that cometh in the Name of the Lord.

Seated upon thy throne in heaven and upon a foal on earth,

O Christ God, thou didst receive the praise of the angels and the hymns of the children:

Blessed is he that cometh to recall Adam.

The Scripture Readings for the Divine Liturgy

Blessed is he that cometh in the Name of the Lord.

Confess to the Lord; for he is good.

The Reading is from St. Paul to the Philippians.

BRETHREN, rejoice in the Lord always; again I say, Rejoice. Let all men know your forbearance. The Lord is at hand. Have no anxiety about anything, but in everything by prayer and supplication with thanksgiving let your requests be made known to God. And the peace of God, which passes all understanding, will keep your hearts and minds in Christ Jesus.

Six days before the Passover, Jesus came to Bethany, where Lazarus was, whom Jesus had raised from the dead. There they made a supper; Martha served, but Lazarus was one of those at table with him. Mary took a pound of costly ointment of pure nard and anointed the feet of Jesus and wiped his feet with her hair; and the house was filled with the fragrance of the ointment. But Judas Iscariot, one of his disciples (he who was to betray him), said, “Why was this ointment not sold for three hundred denarii and given to the poor?” This he said, not that he cared for the poor but because he was a thief, and as he had the money box he used to carry what was put into it. Jesus said, “Let her alone, let her keep it for the day of my burial. The poor you always have with you, but you do not have me always.”
When the great crowd of the Jews learned that he was there, they came, not only because of Jesus but also to see Lazarus, whom he had raised from the dead. So the chief priests planned to put Lazarus to death also, because on account of him many of the Jews were going away and believing Jesus.
The next day a great crowd who had come to the feast heard that Jesus was coming to Jerusalem. So they took branches of palm trees and went out to meet him, crying, “Hosanna! Blessed be he who comes in the name of the Lord, even the King of Israel!” And Jesus found a young ass and sat upon it; as it is written, “Fear not, daughter of Zion; behold, your king is coming, sitting on an ass’s colt!” His disciples didn’t understand this at first; but when Jesus was glorified, then they remembered that this had been written of him and had been done to him. The crowd that had been with him when he called Lazarus out of the tomb and raised him from the dead bore witness. The reason why the crowd went to meet him was that they heard that he had done this sign.

Other Commemorations on this day:

Apostles Jason and Sosipater of the Seventy, the Virgin Cercyra, and those with them (1st c.). Martyrs Dada, Maximus, and Quinctilian, at Dorostolum (286). St. Cyril, Bishop of Túrov (1183). Martyrs Saturninus, Jakischolus (Inischolus), Faustianus, Januarius, Marsalius, Euphrasius, Mammius, Zeno, Eusebius, Neon, and Vitalis, who were converted by Apostles Jason and Sosipater (ca. 63).