Sunday of the Commemoration of the Seventh Ecumenical Council

Schedule for this week:

Quote for the Week:

“Love does not reflect. Love is simple. Love never mistakes. Likewise believe and trust without reflection, for faith and trust are also simple; or better: God, in whom we believe and in whom we trust, is an incomplex Being, as He is also simply love.”

Blessed are you, O Lord, the God of our fathers.
Verse: For you are just in all you have done.

TITUS, my son, the saying is sure. I desire you to insist on these things, so that those who have believed in God may be careful to apply themselves to good deeds; these are excellent and profitable to men. But avoid stupid controversies, genealogies, dissensions, and quarrels over the law, for they are unprofitable and futile. As for a man who is factious, after admonishing him once or twice, have nothing more to do with him, knowing that such a person is perverted and sinful; he is self-condemned.

When I send Artemas or Tychicos to you, do your best to come to me at Nicopolis, for I have decided to spend the winter there. Do your best to speed Zenas the lawyer and Apollos on their way; see that they lack nothing. And let our people learn to apply themselves to good deeds, so as to help cases of urgent need, and not to be unfruitful.

All who are with me send greeting to you. Greet those who love us in the faith. Grace be with you all. Amen.

The Lord said this parable: “A sower went out to sow his seed; and as he sowed, some fell along the path, and was trodden under foot, and the birds of the air devoured it. And some fell on the rock; and as it grew up, it withered away, because it had no moisture. And some fell among thorns; and the thorns grew with it and choked it. And some fell into good soil and grew, and yielded a hundredfold.” And when his disciples asked him what this parable meant, he said, “To you it has been given to know the secrets of the kingdom of God; but for others they are in parables, so that seeing they may not see, and hearing they may not understand. Now the parable is this: The seed is the word of God. The ones along the path are those who have heard; then the devil comes and takes away the word from their hearts, that they may not believe and be saved. And the ones on the rock are those who, when they hear the word, receive it with joy; but these have no root, they believe for a while and in time of temptation fall away. And as for what fell among the thorns, they are those who hear, but as they go on their way they are choked by the cares and riches and pleasures of life, and their fruit does not mature. And as for that in the good soil, they are those who, hearing the word, hold it fast in an honest and good heart, and bring forth fruit with patience.” As he said these things, he cried out “He who has ears to hear, let him hear.”

During the regular Sundays of the Church year, we each Sunday move through a repeating cycle of eight Tones, with different music and hymns for each tone, which celebrate the resurrection of Christ. This Sunday falls on Tone 7. Here is the Sunday troparion (hymn) of the Resurrection for this Sunday:

Thou didst shatter death by thy Cross;

thou didst open paradise to the thief;

thou didst turn the mourning of the ointment-bearing women into joy,

Click here to listen to this troparion being sung, and here for sheet music.

The Holy Fathers of the Seventh Ecumenical Council

Today the Church remembers the 350 holy Fathers of the Seventh Ecumenical Council under the holy Patriarch Tarasius (February 25).

The Synod of 787, the second to meet at Nicea, refuted the Iconoclast heresy during the reign of Empress Irene and her son Constantine Porphyrogenitos.

The Council decreed that the veneration of icons was not idolatry (Exodus 20:4-5), because the honor shown to them is not directed to the wood or paint, but passes to the prototype (the person depicted). It also upheld the possibility of depicting Christ, Who became man and took flesh at His Incarnation. The Father, on the other hand, cannot be represented in His eternal nature, because “no man has seen God at any time” (John 1:18).

– To read an essay on the iconoclastic controversy in the Eighth Century based on the book The Orthodox Church in the Byzantine Empire (Saint Stephen’s Course in action!), click Here. 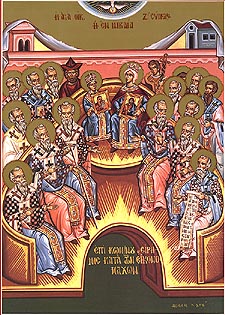