Services during this coming week:

Divine Liturgy is at 10:00 am Sunday morning, 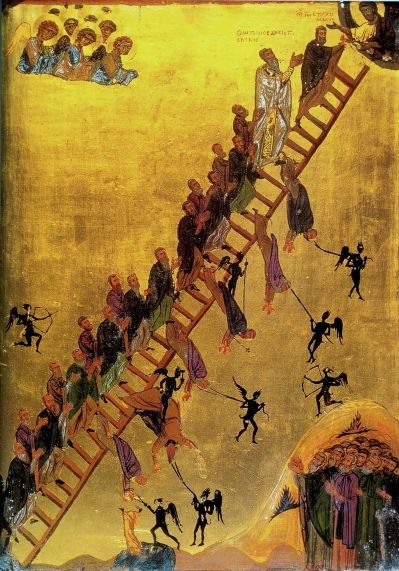 BRETHREN, when God made a promise to Abraham, since he had no one greater by whom to swear, he swore to himself, saying, “Surely I will bless you and multiply you.” And thus Abraham, having patiently endured, obtained the promise. Men indeed swear by a greater than themselves, and in all their disputes an oath is final for confirmation. So when God desired to show more convincingly to the heirs of the promise the unchangeable character of his purpose, he interposed with an oath, so that through two unchangeable things, in which it is impossible that God should prove false, we who have fled for refuge might have strong encouragement to seize the hope set before us. We have this as a sure and steadfast anchor of the soul, a hope that enters into the inner shrine behind the curtain, where Jesus has gone as a forerunner on our behalf, having become a high priest for ever after the order of Melchizedek.

At that time, someone from the crowd answered Him, “Teacher, I brought my son to you, for he has a spirit that makes him mute. And whenever it seizes him, it throws him down, and he foams and grinds his teeth and becomes rigid. So I asked your disciples to cast it out, and they were not able.” And He answered them, “O faithless generation, how long am I to be with you? How long am I to bear with you? Bring him to me.” And they brought the boy to Him. And when the spirit saw him, immediately it convulsed the boy, and he fell on the ground and rolled about, foaming at the mouth. And Jesus asked his father, “How long has this been happening to him?” And he said, “From childhood. And it has often cast him into fire and into water, to destroy him. But if you can do anything, have compassion on us and help us.” And Jesus said to him, “‘If you can’! All things are possible for one who believes.” Immediately the father of the child cried out and said, “I believe; help my unbelief!” And when Jesus saw that a crowd came running together, he rebuked the unclean spirit, saying to it, “You mute and deaf spirit, I command you, come out of him and never enter him again.” And after crying out and convulsing him terribly, it came out, and the boy was like a corpse, so that most of them said, “He is dead.” But Jesus took him by the hand and lifted him up, and he arose. And when he had entered the house, his disciples asked him privately, “Why could we not cast it out?” And He said to them, “This kind cannot be driven out by anything but prayer.” They went on from there and passed through Galilee. And He did not want anyone to know, for He was teaching His disciples, saying to them, “The Son of Man is going to be delivered into the hands of men, and they will kill Him. And when He is killed, after three days He will rise.”

Quote for the Week

“Let us acquire a contrite heart, a soul humbled in mind, and a heart that by means of tears and repentance is pure from every stain and defilement of sin. So shall we too be found worthy in due time quickly to rise to such heights that even hear and now we may see and enjoy the ineffable blessings of the divine light, if not perfectly, at least in part, and to the extent to which we are able. So shall we both unite ourselves to God, and God will be united to us. To those who come near us we shall become ‘light’ and ‘salt’ * to their great benefit in Christ Jesus our Lord.”