We look forward to having Father Onouphry serving this weekend!

From the heights thou didst descend O Compassionate One, and thou didst submit to the three-day burial, that thou might deliver us from passion. Thou art our Life and our Resurrection, O Lord, glory to thee.

Apolytikion for Afterfeast of the Transfiguration of our Lord and Savior Jesus Christ in the 7th Tone (Click here to listen, here for sheet music)

When, O Christ our God, thou wast transfigured on the mountain, thou didst reveal thy glory to thy Disciples in proportion as they could bear it. Let thine everlasting light also enlighten us sinners, through the intercessions of the Theotokos, O thou Bestower of light, glory to thee.

Seasonal Kontakion in the 7th Tone

Thou wast transfigured on the mount, and thy Disciples, in so far as they were able, beheld thy glory, O Christ our God: so that, when they should see thee crucified, they would remember that thy suffering was voluntary, and could declare to all the world that thou art truly the effulgent Splendor of the Father.

The Reading is from St. Paul’s First Letter to the Corinthians 3:9-17

BRETHREN, we are God’s fellow workers; you are God’s field, God’s building. According to the grace of God given to me, like a skilled master builder. I laid a foundation, and another man is building upon it. Let each man take care how he builds upon it. For no other foundation can any one lay than that which is laid, which is Jesus Christ. Now if any one builds on the foundation with gold, silver, precious stones, wood, hay, straw – each man’s work will become manifest; for the Day will disclose it, because it will be revealed with fire, and the fire will test what sort of work each one has done. If the work which any man has built on the foundation survives, he will receive a reward. If any man’s work is burned up, he will suffer loss, though he himself will be saved, but only as through fire. Do you not know that you are God’s temple and that God’s Spirit dwells in you? If any one destroys God’s temple, God will destroy him. For God’s temple is holy, and that temple you are.

At that time, Jesus made the disciples get into the boat and go before him to the other side, while he dismissed the crowds. And after he had dismissed the crowds, he went up into the hills by himself to pray. When evening came, he was there alone, but the boat by this time was many furlongs distant from the land, beaten by the waves; for the wind was against them. And in the fourth watch of the night he came to them, walking on the sea. But when the disciples saw him walking on the sea, they were terrified, saying, “It is a ghost!” And they cried out for fear. But immediately he spoke to them, saying “Take heart, it is I; have no fear.”

And Peter answered him, “Lord, if it is you, bid me come to you on the water.” He said, “Come.” So Peter got out of the boat and walked on the water and came to Jesus; but when he saw the wind, he was afraid, and beginning to sink he cried out, “Lord, save me.” Jesus immediately reached out his hand and caught him, saying to him, “O man of little faith, why did you doubt?” And when they entered the boat, the wind ceased. And those in the boat worshiped him, saying, “Truly you are the Son of God.” And when they had crossed over, they came to land at Gennesaret. 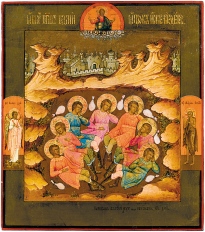 The Seven Youths hid themselves in a certain cave near Ephesus in the year 250, to escape the persecution of Decius. By divine grace, a sleep came upon them and they slept for 184 years, until the reign of Saint Theodosius the Younger, when the doctrine of the resurrection was being assailed by heretics. They then awoke, that is, were resurrected, confirming in the sight of all the bodily resurrection; and again after a short time, by divine command, they reposed in the Lord in the year 434.

Transfiguration of our Lord and Savior Jesus Christ

Our Lord had spoken to His disciples many times not only concerning His Passion, Cross, and Death, but also concerning the coming persecutions and afflictions that they themselves would endure. Since all these evils were near at hand, but the enjoyment of good things which they hoped to receive in their stead was yet to come, our Savior desired to give them full assurance, evidently and openly, concerning that glory which is prepared for those who endure to the end. Therefore, fulfilling that which He had promised shortly before, that “there be some standing here which shall not taste of death, till they see the Son of man coming in His Kingdom” (Matt. 16:28), He took His three foremost disciples and ascended Mount Tabor, where He was transfigured before them. His face shone like the sun, and His clothes became white as the light. Suddenly, together with this dread and marvelous effulgence of light, there appeared those pinnacles of the Prophets, Moses and Elias, who spoke with the Lord Jesus concerning His saving Passion which was about to take place. Standing before Him as reverent servants, they showed that He is the Lord of both the living and the dead, for Moses came forth from Hades, having died many centuries before, and Elias, as it were from heaven, whither he had been taken up while yet alive. After a little while a radiant cloud overshadowed them and out of the cloud they heard that same voice which had been heard at the Jordan at the Baptism of Christ, testifying to the Divinity of Jesus and saying: “This is My beloved Son, in Whom I am well-pleased; hear ye Him” (Matt. 17: 5).

Such are the marvels, truly worthy of God, celebrated in this present feast, which is an image and prefiguring of the future state of the righteous, whose splendor the Lord spoke of, saying: “Then shall the righteous shine forth as the sun” (Matt. 13:43). It is because of this that the Kontakion of this Feast is said daily (when there is not a great feast) in the Service of the Typica in perpetual commemoration of the glory that will be the lot of the Saints. According to tradition, the Lord’s Transfiguration came to pass forty days before His Crucifixion; this is why the Transfiguration is celebrated forty days before the Exaltation of the Cross.

This Saint, who was born in Spain, was the Archdeacon of the Church of Rome, caring for the sacred vessels of the Church and distributing money to the needy. About the year 257, a harsh persecution was raised up against the Christians by Valerian. Pope Sixtus, who was from Athens, was commanded to worship the idols, and refused; before his martyrdom by beheading, he committed to Laurence all the sacred vessels of the Church. When Laurence was arrested and brought before the Prefect, he was questioned concerning the treasures of the Church; he asked for three days’ time to prepare them. He then proceeded to gather all the poor and needy, and presented them to the Prefect and said, “Behold the treasures of the Church.” The Prefect became enraged at this and gave command that Laurence be racked, then scourged with scorpions (a whip furnished with sharp iron points – compare II Chron. 10:11), then stretched out on a red-hot iron grill. But the courageous athlete of Christ endured without groaning. After he had been burned on one side, he said, “My body is done on one side; turn me over on the other.” And when this had taken place, the Martyr said to the tyrants, “My flesh is now well done, you may taste of it.” And when he had said this, and had prayed for his slayers in imitation of Christ, he gave up his spirit on August 10, 258.

“The principle and source of the virtues is a good disposition of the will, that is to say, an aspiration for goodness and beauty. God is the source and ground of all supernal goodness. Thus the principle of goodness and beauty is faith or, rather, it is Christ, the rock of faith, who is principle and foundation of all virtues. On this rock we stand and on this foundation we build every good thing (cf. I Cor. 3:11).”– St. Gregory of Sinai, On Commandments and Doctrines no. 83, [Philokalia Vol. 3 edited by Palmer, Sherrard and Ware; Faber and Faber pg. 228], 14th century
“The very fire which purifies gold, also consumes wood. Precious metals shine in it like the sun, rubbish burns with black smoke. All are in the same fire of Love. Some shine and others become black and dark. In the same furnace steel shines like the sun, whereas clay turns dark and is hardened like stone. God is a loving fire, and He is a loving fire for all: good and bad. There is, however, a great difference in the way people receive this loving fire of God. The difference is in man, not God.” –Dr. Alexandre Kalomiros, The River of Fire, pp. 17 & 19 , 20th century