While the stone was sealed by the Jews, and the soldiers were guarding thy most pure body. Thou didst rise on the third day, O Savior, granting life to the world. For which caused the heavenly powers cried aloud unto thee, O Giver of life, Glory to thy Resurrection, O Christ! Glory to thy kingdom! Glory to thy providence, O thou who alone art the lover of mankind.

In thy birth-giving, O Theotokos, thou didst keep and preserve virginity; and in thy falling-asleep thou hast not forsaken the world; for living thou wast translated, being the Mother of Life. Wherefore, by thine intercessions, deliver our souls from death.

Seasonal Kontakion in the 2nd Tone

Verily, the Theotokos, who is ever watchful in intercessions, who is never rejected, neither tomb nor death could control. But being the Mother of Life, he who dwelt in her ever-virgin womb did translate her to life.

The Reading is from St. Paul’s First Letter to the Corinthians 4:9-16

BRETHREN, God has exhibited us apostles as last of all, like men sentenced to death; because we have become a spectacle to the world, to angels and to men. We are fools for Christ’s sake, but you are wise in Christ. We are weak, but you are strong. You are held in honor, but we in disrepute. To the present hour we hunger and thirst, we are ill-clad and buffeted and homeless, and we labor, working with our own hands. When reviled, we bless; when persecuted, we endure; when slandered, we try to conciliate; we have become, and are now, as the refuse of the world, the off-scouring of all things. I do not write this to make you ashamed, but to admonish you as my beloved children. For though you have countless guides in Christ, you do not have many fathers. For I became your father in Christ Jesus through the gospel. I urge you, then, be imitators of me.

At that time, a man came up to Him and kneeling before Him said, “Lord, have mercy on my son, for he is an epileptic and he suffers terribly; for often he falls into the fire, and often into the water. And I brought him to Your disciples, and they could not heal him.” And Jesus answered, “O faithless and perverse generation, how long am I to be with you? How long am I to bear with you? Bring him here to me.” And Jesus rebuked him, and the demon came out of him, and the boy was cured instantly. Then the disciples came to Jesus privately and said, “Why could we not cast it out?” He said to them, “Because of your little faith. For truly I say to you, if you have faith as a grain of mustard seed, you will say to this mountain, ‘Move hence to yonder place,’ and it will move; and nothing will be impossible to you. But this kind never comes out except by prayer and fasting.” As they were gathering in Galilee, Jesus said to them, “The Son of man is to be delivered into the hands of men, and they will kill Him, and He will be raised on the third day.” 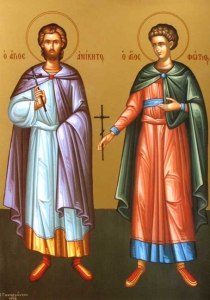 The Holy Martyrs Photius and Anicetus of Nicomedia

These Martyrs contested in Nicomedia about the year 288. When Diocletian stirred up his persecution of the Christians, Anicetus presented himself openly and said that all who worship idols are blind and senseless. He was beaten with rods so ruthlessly that his bones appeared from the rents and wounds in his flesh. As he was suffering further torments, his nephew Photius came and embraced him, calling him his father and his uncle. He was also put to many tortures with him. They were then imprisoned together for three years. Finally they were cast into a furnace, where they gave up their spirits, and their bodies were preserved unharmed. Saint Anicetus is one of the Holy Unmercenaries.

The divine Maximus, who was from Constantinople, sprang from an illustrious family. He was a lover of wisdom and an eminent theologian. At first, he was the chief private secretary of the Emperor Heraclius and his grandson Constans. But when the Monothelite heresy became predominant in the royal court, out of hatred for this error the Saint departed for the Monastery at Chrysopolis (Scutari), of which he later became the abbot. When Constans tried to constrain him either to accept the Monothelite teaching, or to stop speaking and writing against it – neither of which the Saint accepted to do – his tongue was uprooted and his right hand was cut off, and he was sent into exile, where he reposed in 662. At the time only he and his few disciples were Orthodox in the East. See also January 21. 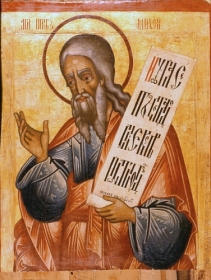 This Prophet (whose name means “who is like God?”), was a Morasthite from the land of Judah. He prophesied more than fifty years in the days of Joatham, Ahaz, and Hezekias, Kings of Judah. These kings reigned in the eighth century before Christ. From this it is clear that this Michaias is not the one who was the son of Iembla (or Imlah-III Kings 22:8), who censured Ahab and was murdered by Ahab’s son Joram, as the Synaxaristes says; for this Joram reigned the ninth century before Christ. Yet Michaias was still prophesying, as mentioned above, in the days of Hezekias, who was a contemporary of Hosea and Esaias, and of Hoshea, the last King of the ten tribes of Israel, when that kingdom was destroyed by Salmanasar (Shalmaneser), King of the Assyrians (IV Kings 17: 1 – 16; 18: 1). This Michaias is sixth in rank among the minor Prophets. His book of prophecy is divided into seven chapters; he prophesied that the Christ would be born in Bethlehem (Michaias 5: 2). In the reign of Saint Theodosius the Great, the holy relics of the Prophets Michaias and Abbacum were found through a divine revelation to Zebennus, Bishop of Eleutheropolis (Sozomen, Eccl. Hist., Book VII, 29). 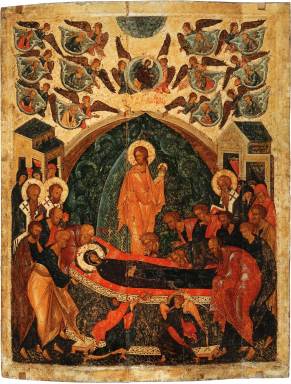 Concerning the Dormition of the Theotokos, this is what the Church has received from ancient times from the tradition of the Fathers. When the time drew nigh that our Savior was well-pleased to take His Mother to Himself, He declared unto her through an Angel that three days hence, He would translate her from this temporal life to eternity and bliss. On hearing this, she went up with haste to the Mount of Olives, where she prayed continuously. Giving thanks to God, she returned to her house and prepared whatever was necessary for her burial. While these things were taking place, clouds caught up the Apostles from the ends of the earth, where each one happened to be preaching, and brought them at once to the house of the Mother of God, who informed them of the cause of their sudden gathering. As a mother, she consoled them in their affliction as was meet, and then raised her hands to Heaven and prayed for the peace of the world. She blessed the Apostles, and, reclining upon her bed with seemliness, gave up her all-holy spirit into the hands of her Son and God.

With reverence and many lights, and chanting burial hymns, the Apostles took up that God-receiving body and brought it to the sepulchre, while the Angels from Heaven chanted with them, and sent forth her who is higher than the Cherubim. But one Jew, moved by malice, audaciously stretched forth his hand upon the bed and immediately received from divine judgment the wages of his audacity. Those daring hands were severed by an invisible blow. But when he repented and asked forgiveness, his hands were restored. When they had reached the place called Gethsemane, they buried there with honor the all-immaculate body of the Theotokos, which was the source of Life. But on the third day after the burial, when they were eating together, and raised up the artos (bread) in Jesus’ Name, as was their custom, the Theotokos appeared in the air, saying “Rejoice” to them. From this they learned concerning the bodily translation of the Theotokos into the Heavens.

These things has the Church received from the traditions of the Fathers, who have composed many hymns out of reverence, to the glory of the Mother of our God (see Oct. 3 and 4). 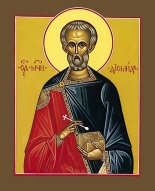 Diomedes the Physician & Martyr of Tarsus

The holy Martyr Diomedes was from Tarsus in Cilicia, a physician who treated bodies with his healing art and souls with his piety. In the days of the Emperor Diocletian, about the year 288, Diomedes left Tarsus and came to Nicaea, where he benefited many both as a physician and as a preacher of the Faith. He was accused to Diocletian, who sent men to fetch him. When they arrived, although finding that he had already given up his soul to the Lord, they cut off his head to take it to the Emperor, and because of their inhumanity were stricken with blindness. When Diocletian saw the Saint’s head, he commanded them to take it back and put it on the body in its place; when they had done so, they received their sight again. Saint Diomedes is one of the Holy Unmercenaries.

“Here Christ is not speaking of that faith which believes in Him undoubtingly and knows Him to be true God, but of the faith (needed) to work miracles. If ye have faith, He said, so exceedingly warm and burning as a grain of mustard seed (for these are its qualities), and if it is believed without a doubt that ye will perform signs, then ye will receive such power, that if ye desire to move the very mountains, ye will move them.”

“Yet if his unbelief was the cause … why does He blame the disciples? Signifying, that even without persons to bring the sick in faith, they might in many instances work a cure.”